I will delete all comments, which contain links to commercial web sites, and report them as SPAM. This blog is about sharing, not advertising.

A friend of mine is a big Philips Ambilight fan and asked for a TV for his parents. I came across this Philips 40PFL9715K in eBay Classifieds and picked it up for 125€. The seller said that the image unpredictably goes black. A quick test at the seller's place did not show the error and the panel looked 100% ok. That's always the first thing I'd like to be sure of when I start a TV project.

I switched it on at home and - nothing but flickering. TV won't start. Weird. It must be a semi-mechanical problem then. The vibrations during transport already had some influence, obviously.

Also, a regular clicking noise was emitted from the TCON. Oh, I hate clicking TCON boards! With mixed feelings, I opened up the machine. 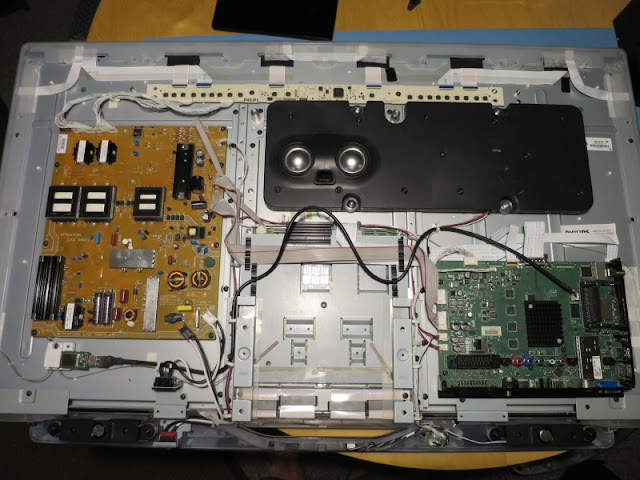 This device is packed! A sattelite receiver, built-in WiFi with one antenna on each side, two woofer speakers and an Ambilight which also illuminates the top of the TV, not just the sides. And, thank you Philips (or Toshiba, for that matter, who produced the panel and the TCON), the TCON is deeply buried under plenty of cables and the holder for the stand. I hate this!

As always, some tapes and cable guides were loose due to dried glue. And some sloppy wiring here and there. Philips is not Panasonic or Sony: 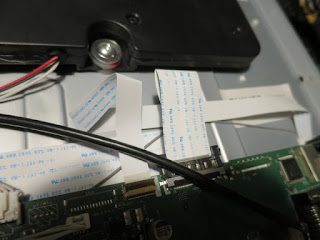 The "eyes" of the so-called woofers reminded me of something... 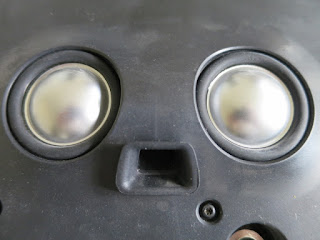 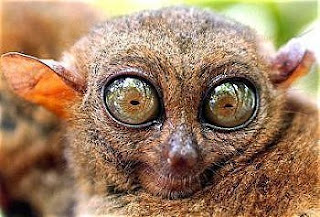 The first thing I do is to check the power supply voltages. They all measured exactly as it is printed on the board. Except for the 12V line driving the TCON, which is supposed to have 12.5V and only had 11.9V. I found some cheap arse electrolytics: 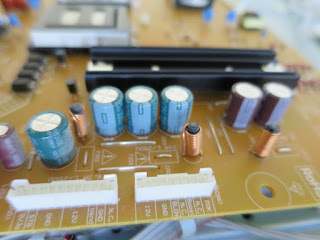 I removed all the green ones to measure them individually, but none of them had any defect. ESR and capacity were perfect. Anyway, let's use the opportunity and put some quality Nichicon HD in instead. I had to bulge the back cover a little to make room for the big one :-) 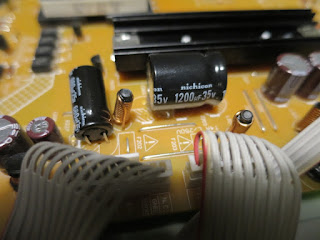 The voltage was still at 11.9V, so that was most likely ok and the 12.5V were never there in the first place. A little irritating still. A quick check for supply line noises neither showed anything to get concerned.

I removed the TCON and attached it to my bench power supply to investigate the click noise. This was the biggest TCON board I've seen so far. 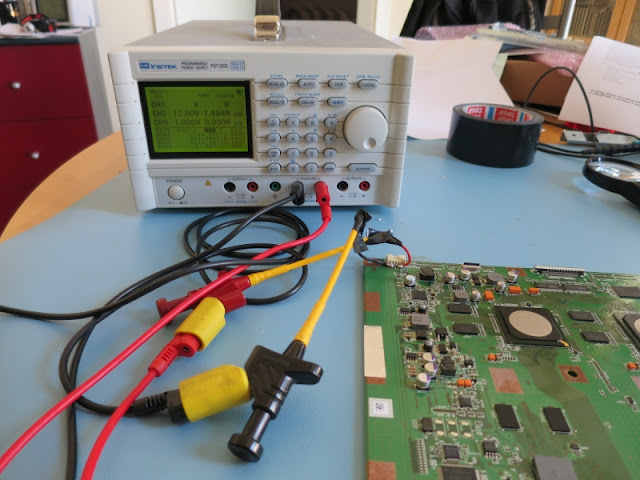 It behaved weirdly. Besides the clicking noise, the current consumption flipped between 1.4A and 0.8A. The voltages measured ok, basically, but the one for the big processor wasn't stable and the PWM impulse at the MOSFET gates regularily dropped out for a tiny amount of time.

The processors get really hot and I had to interrupt the diagnose often to let everything cool down. As I mentioned earlier, I suspected a mechanical problem, so I squeezed and twisted the board at various places. Nothing had any effect until I pressed my finger on the FDS8813 MOSFET. The board immediately stabilized. I suspected a wildly chirping DC/DC converter chip first. To find the FET was actually a relief.

A bad solder joint? I reflowed both FETs. The clicking was gone and the jumps in supply current also. 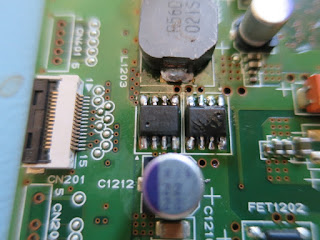 Back in the device, the TCON board behaved well until I plugged in the LVDS cable. Then the clicking started again and the TV standby blinked 9 times, which indicates a non-responsive TCON.

Nevertheless, I was sure that I had found the reason for the defect. Those FETs were not completely dead, but once they got under load, they misbehaved.

I browsed eBay. A refurbished board cost 125€. Outch! But what's this? Someone who had the same problem offered the exact same FETs I had my hands on. Great! And only 10€!

Why did the FET(s) die? They run extremely hot. A little heat conducting block connects them to the cover. The two processors steaming along at over 70°C are close by and grill the two FETs. What a cheap and stupid construction, Toshiba! I decided to improve matters and glued a heatsink on top of the FETs. This brought down the temperature there to about 55°C. The horizontal orientation isn't ideal, but I had no choice here because of the flat cables below it. 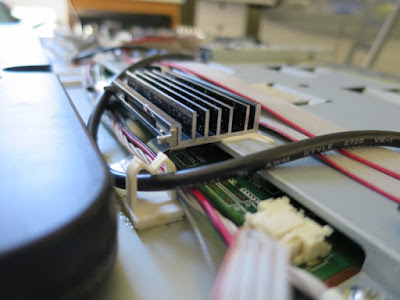 Also, to improve convection, I drilled holes into the back cover right on top of the heatsink: 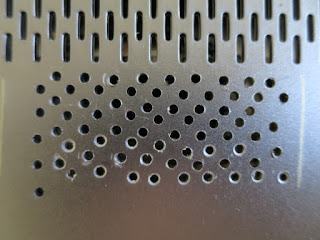 I hope my friend's parents will enjoy their TV for a long time. 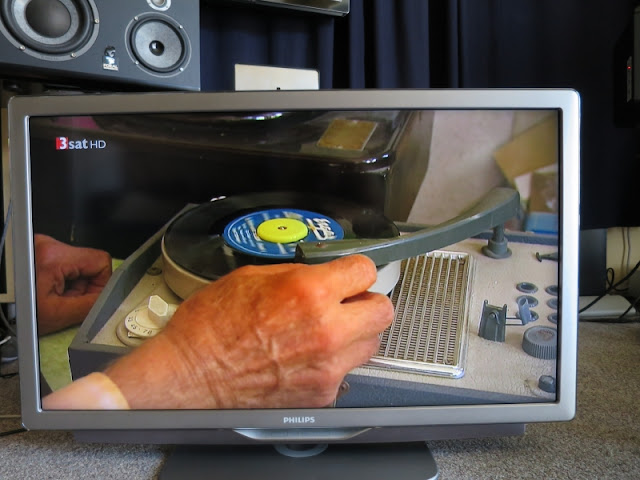 Can this TV beat a Plasma's image quality? No. Even with its direct LED backlight. Like all of the LCD TVs I have repaired, apart from the Sony, it produces a harsh, a little unnatural image for my taste. I am constantly aware that I look at a TV image. With the Panasonic plasmas, I am able to forget that, immerse into the images and feel like looking into the world (with full HD material at least).

Nevertheless, the Philips gives a very decent performance. The picture is crips, and the sound is voluminous thanks to the extra "woofers". The image tint is too much in the red, which can be adjusted via the individual white balance. The 9er series also has a nice heavy aluminum-style remote with precise buttons, not the cheap wobbly plastic one that the lower series have.


The TV did not last long. My friend had it running for half an hour and then it started rebooting again. Now it doesn't even start at all anymore. Argh! It's going back on the lab table. Let this not be one of the BGA chips, please! 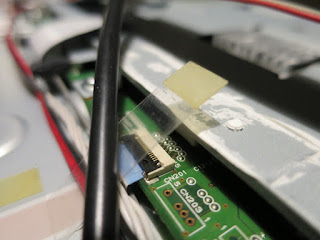 It turned out that the FDS8813 was broken once more. I think I made a mistake during reassembly last time and the transparent plastic piece sneaked between the metal cover and the heat-conducting block for the MOSFET. It is exactly in line and reaches just on top of the chip :-( So, I effectively isolated the chip from its heatsink.

Four evenings intensive testing at over 30° celsius room temperature and it is still running fine. I guess it's fixed for good. :-)


The FDS8813 ist the strongest member of the FDS88xx family. It is still resonably cheap and can replace all the other 8880 (the companion FET on this TCON), 8884, 8882 (on some Philips main boards). There is no need to keep the others on stock.
Posted by Alpengeist at 10:19 PM

All I know about the Philips QFU mainboard problems